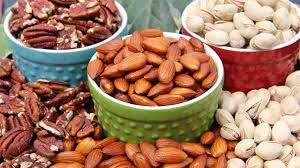 Spanish fertility experts say for the prevention of male infertility, you must include nuts in the daily diet! If it was previously also believed that a man's diet affects fertility, then according to the latest research data, nuts increase the number, mobility and saturation of spermatozoa.

According to research presented at the European Society of Human Reproduction and Embryology conference in Barcelona and published in the American Journal of Clinical Nutrition, regular inclusion of nuts in the daily menu can help in the long run to overcome male infertility.

One of the main indicators of the state of sperm is motility, viability and the number of sperm cells. Reproductive experts advise to improve these parameters to use products containing polysaturated fats, folic acid, tocopherol, selenium, zinc and ascorbic acid. Nuts abound with these healthy nutrients.

For the study, Spanish reproductive scientists selected 119 men of the best fertile age. The subjects were divided into two groups. For 14 days, one group each day consumed 60 grams of nut mixture, which included hazelnuts, almonds and walnuts in equal proportions, and the other group did not change the usual diet, in which nuts were included only occasionally. All volunteers before and after the experiment were analyzed sperm (spermogram).

In evaluating the results, scientists evaluated the concentration, viability and motility of male germ cells. The participants of the study, who consumed nuts every day, had an average sperm concentration of 16% higher, their viability indicators turned out to be 4% more and 6% more motile than those of the other group. Also, for men who spent 14 days on the "nut" diet, significantly lower values ​​of one of the most common causes of infertility in men - DNA fragmentation of spermatozoa were noted.

Reproductive experts strongly recommend men, regardless of age, to carefully monitor their diet. It is no secret that junk food and drinks are often the cause of reproductive disorders in men. It should be remembered that “male infertility” is not always the diagnosis of men of middle and old age. According to experts, young men from 18 to 22 years old, often have difficulty with fertility. Most often, this disease overtakes lovers of fast foods and alcohol. Despite their young age, the quality and quantity of sperm in these men are often significantly lower than the required rate.